How Highly Sensitive People and Empaths deal with trauma

Trauma and the Highly Sensitive Person and/or Empath

Clearing trauma is something many people are awakening to on their spiritual journey.   Initially, it may sound simple, but like many aspects of personal growth, it isn’t always easy.

Many of us have been raised in cultures which allow no space for recognition of trauma.  It is simply not acknowledged.   This can be through lack of awareness via the culture, the family of origin, or both.

For example, I was raised in a small British village by two parents who had truly awful childhoods for one reason or another.  They were both young adults during the Second World War.  Both of them had to learn how to deal with stress and pain without acknowledging it openly.  As their child, I learned their lessons well.

From the British culture, there was (and probably still is) the oft-spoken energetic instruction of ‘the stiff upper lip’.

From phrases.org.uk, the meaning of ‘keep a stiff upper lip’ is defined as

Remain resolute and unemotional in the face of adversity, or even tragedy.

It was an instruction to power on through and manage whatever came a person’s way without demonstrating emotion.  (Interesting to note – the origin of this phrase may have actually come from the US culture!).

Of course, this instruction originally came from a place of want and need.   People needed to survive and found a very effective way to do so.

What does blocking trauma and emotion do to our Personal Energy?

Having a stiff upper lip is now diametrically opposed to more modern evolved psychological and spiritual practices.  We are beginning to learn the value of self-examination, review, and release of Personal Energy.

Clearing trauma helps us to be more at peace, increase our physical wellness, and love ourselves fully, instead of living with places we can’t look.

Compartmentalizing trauma may work in the short term, but in the longer term, it is injurious to ourselves and others.

A prime example of this in current day life is the recognition of PTSD (Post-traumatic Stress Disorder) and its’ impact upon the lives of war veterans and their families.  Blocking trauma can result in unhealthy behavior, issues with health and even self-harm.

But what about those who are even more sensitive, such as HSPs or Empaths?  We not only feel the trauma that we experience, yet also sense the trauma of others intensely, too?

How do HSPs and Empaths experience trauma?

If you are reading this, then you may either be interested in your Personal Energy Field, be an HSP or an Empath. So how have we coped with life’s traumas up until now?

If you are anything like me, you became a master disassociator.

This means that when trauma occurs, you jump right out of your body.  You go to a very small part or seeming ‘protected’ part of your inner self where the trauma can’t get you.

During times when I wasn’t sure how to deal with traumatic situations, I became very good at ‘blank face’, and ‘still body’. This would mean that I could read other people, but they couldn’t read me, or read me less, anyway.

Some of my other tricks of the trade were

In so many ways, expounding on the advice from the ‘stiff upper lip’ energetic instruction!  I suspect you may recognize some of the above responses from your own playlist.

How to cope with much more intense responses to trauma as an HSP or Empath? Causal body energy work and Spiritual Practice can help

Two approaches work really well for me.  The first thing I do is work with my Causal Body, which is a part of our Personal Energy.

Think of your Causal body as the connection between your inner child and your adult self. This connection is the Causal Body. The more you work on your intuition, the stronger this connection grows. You could also think of it as an aspect of your Soul which grows stronger and more active as you work with it.Click To Tweet

My Akashic Guides comment on the Causal Body is as follows

“These two parts of Our Selves, the adult, and inner child are always connected from the Akashic perspective.

When we incarnate and live in the Planet Earth schoolroom, these parts can become fragmented, separated and divided by trauma, programming, and personal choice.

If somebody tells you ‘not to be a baby’ you may let go of a connected piece of your inner child aspect because – and this is the part of the event that is a good idea – you want to fit in! Everybody wants to fit in when they are younger.

You don’t lose this inner child piece or other pieces that are let go because they are always connected in multi-dimensionality, but in 3D they are ‘apparently’ separated.

The adult part of ourselves can be broken, thwarted and lost – or there can sometimes be a refusal by the other parts of ourselves, including the inner child, to assume the responsibilities that come with being an adult on planet Earth.

These fragmented pieces can float about in the aura, knocking into each other or into other people’s lost and fragmented pieces, sometimes cause triggering, more pain and disassociation, or in the more hopeful scenario, healing, and greater wholeness.

From the Akashic Energy Perspective, as we said earlier, the Causal Body is always whole and healed. Think of it as an energetic internet superhighway between our younger and older selves. They are different aspects of us so why not communicate and pass information and data between them? We never know what we might learn!”

As an HSP and Empath, I process energy differently from other people.  Of course, for all I know, we all do — and it’s simply that some people haven’t expanded their awareness in the same way at present.

For anyone who is highly sensitive and spiritual, I recommend at the very least

Becoming more aware of your Personal Energy through Causal Energy Work will grow your intuition, your connection with your Soul and increase what I call your coping bandwith.

Sarah is an energy intuitive and gives New World Energetics Readings. Learn how to sense your energy field (and others), get connected with your Akashic Records, learn how to balance your energy - personal growth on the Spiritual Journey. Connect on Skype at 'NewWorldEnergetics' or call 1-316 247 4144 View all posts by Sarah Lawrence 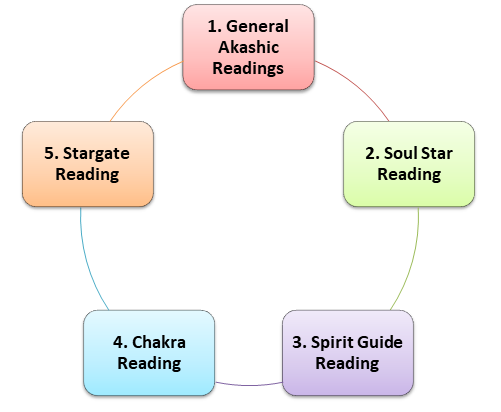 How is an Akashic Records Reading different than a Psychic Reading?68 Total Shares

Our brains are hard-wired to believe

Receive signs from your intuition and avoid interpretation

What can I google on the Spiritual Internet? The Akashic Records or Akash…there are similarities | Akashic Messages